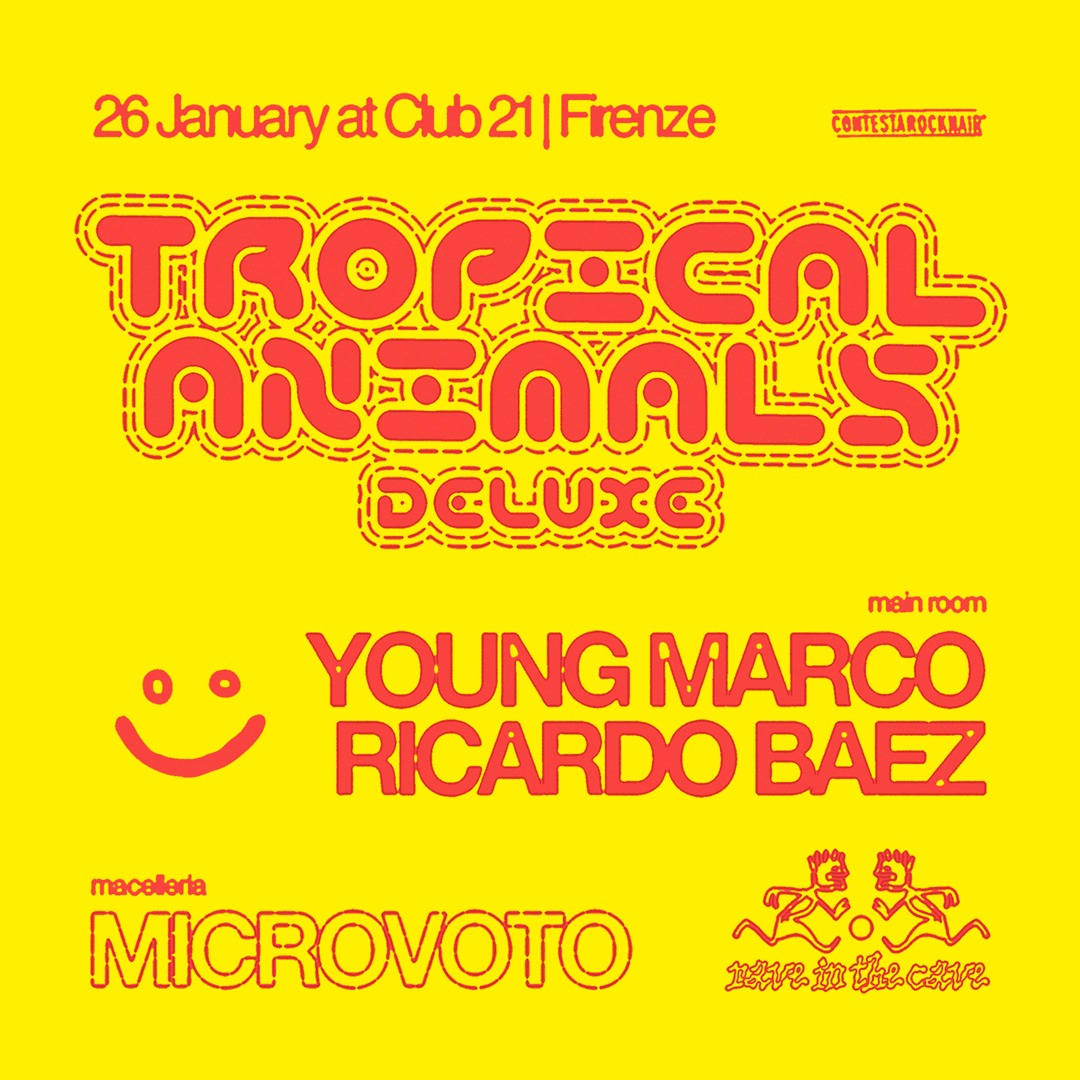 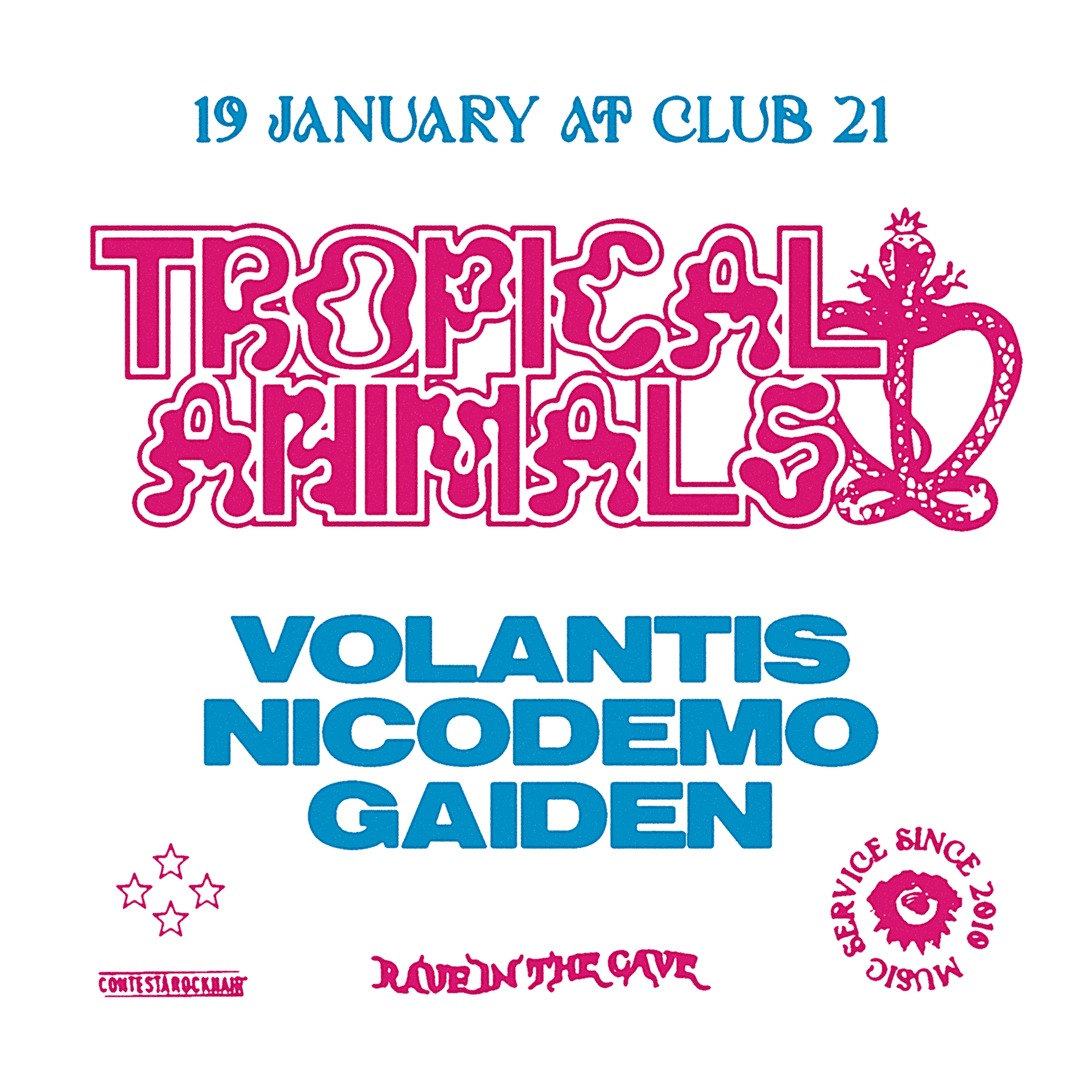 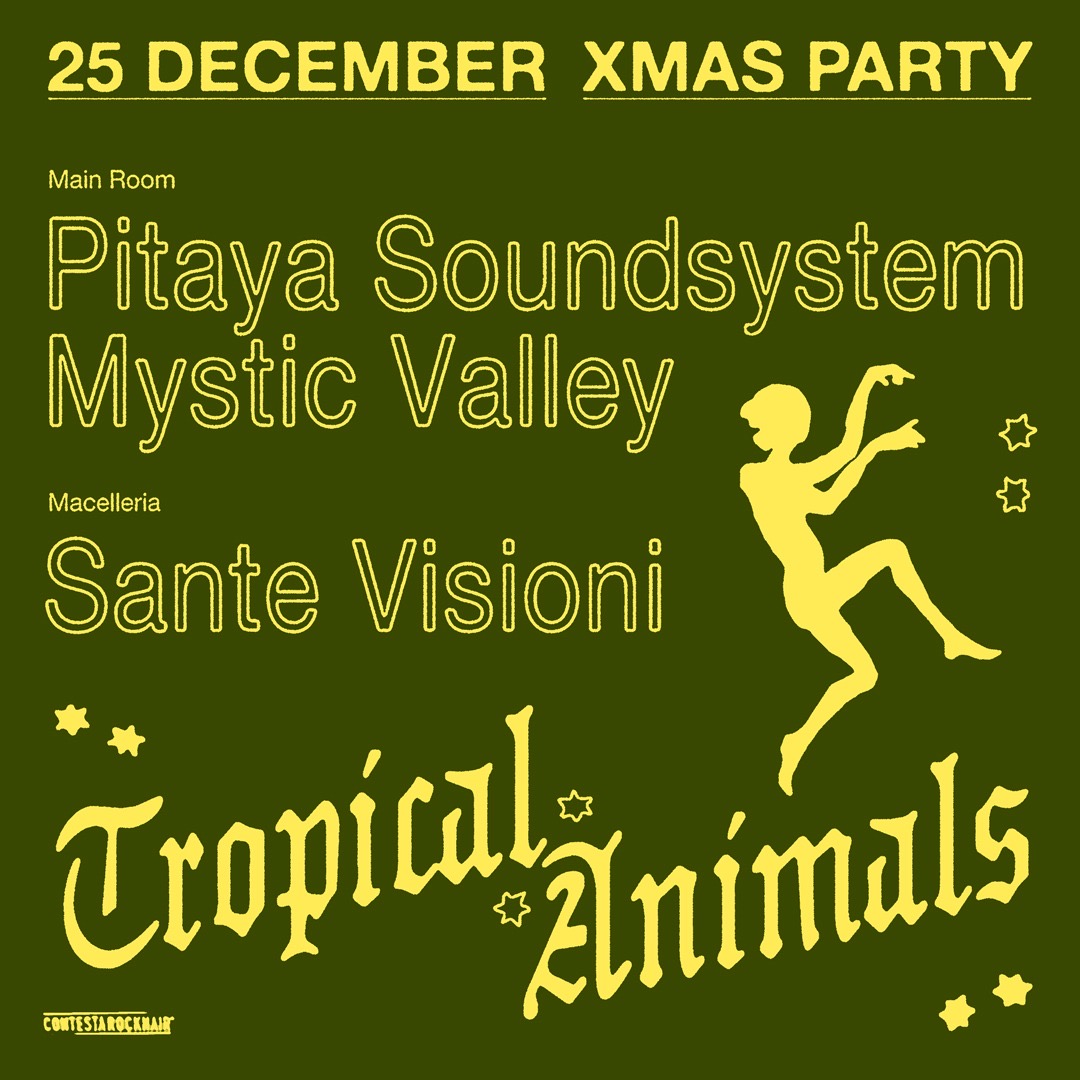 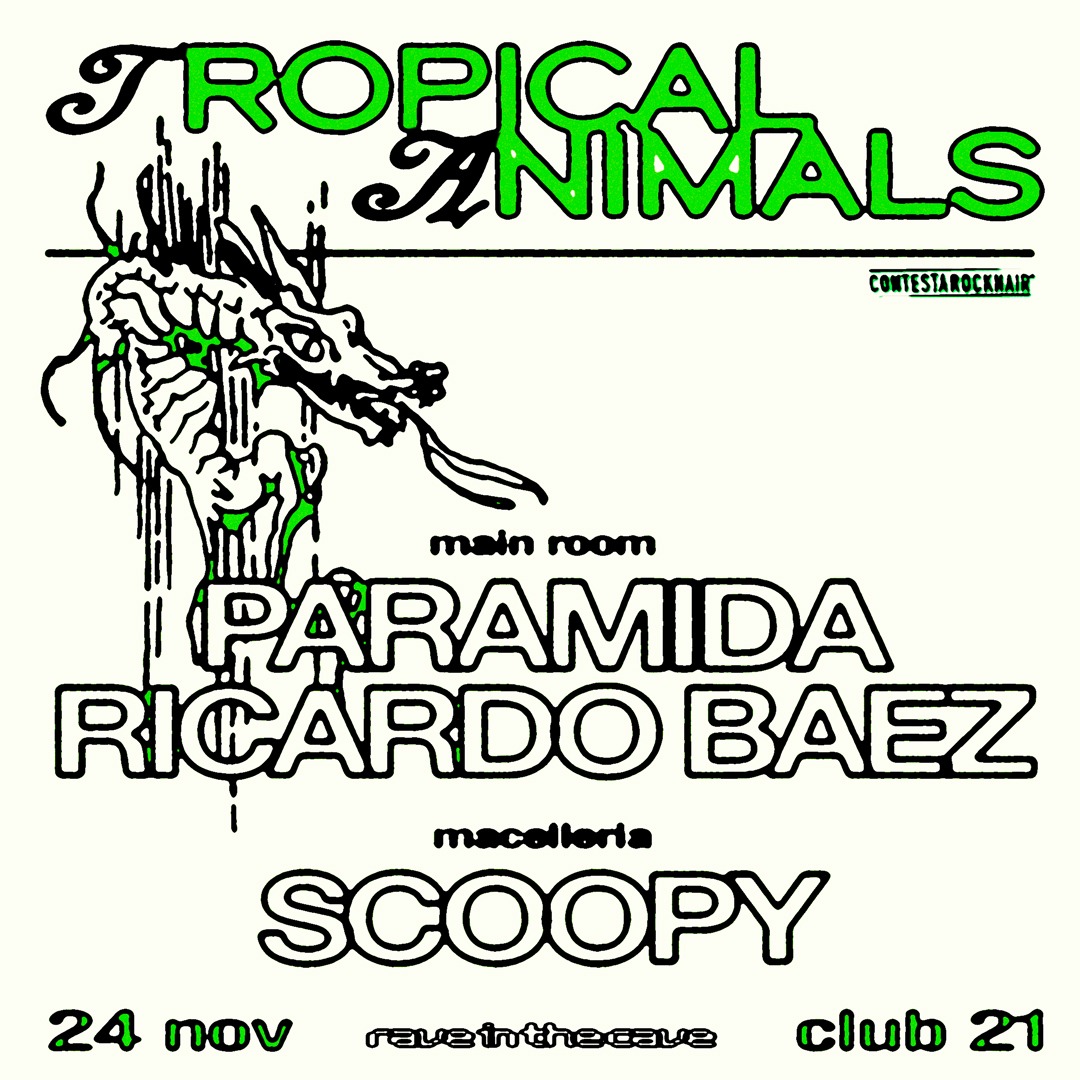 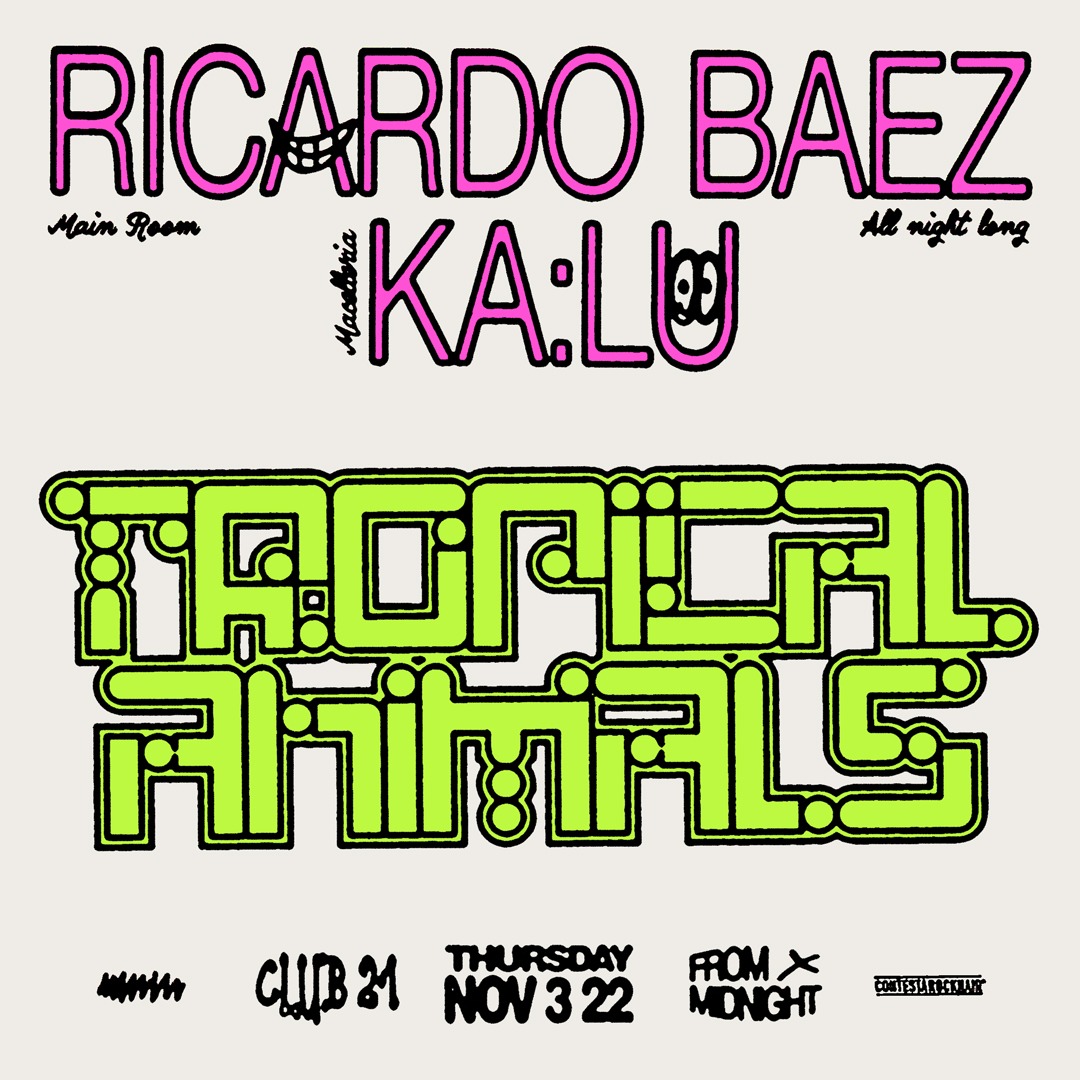 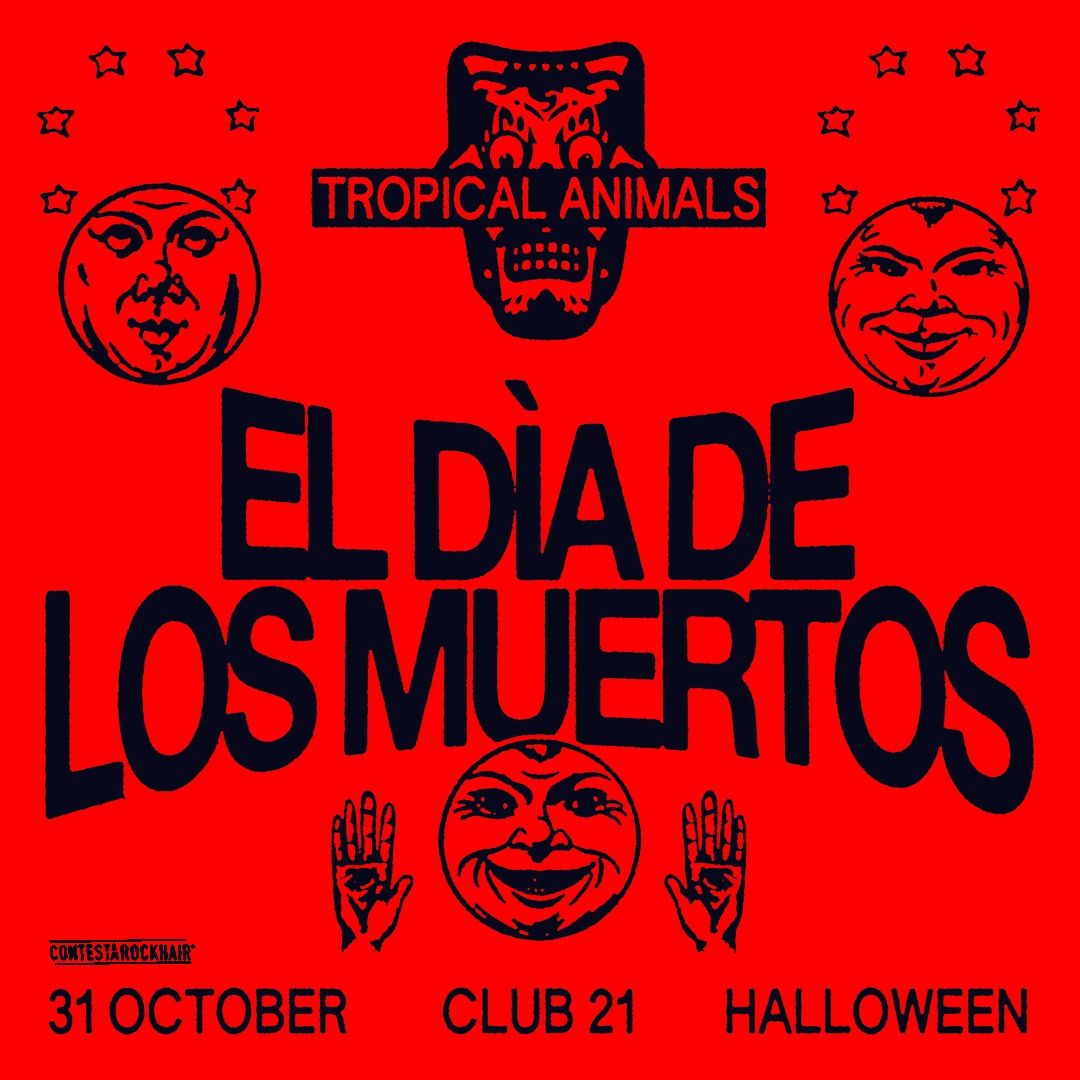 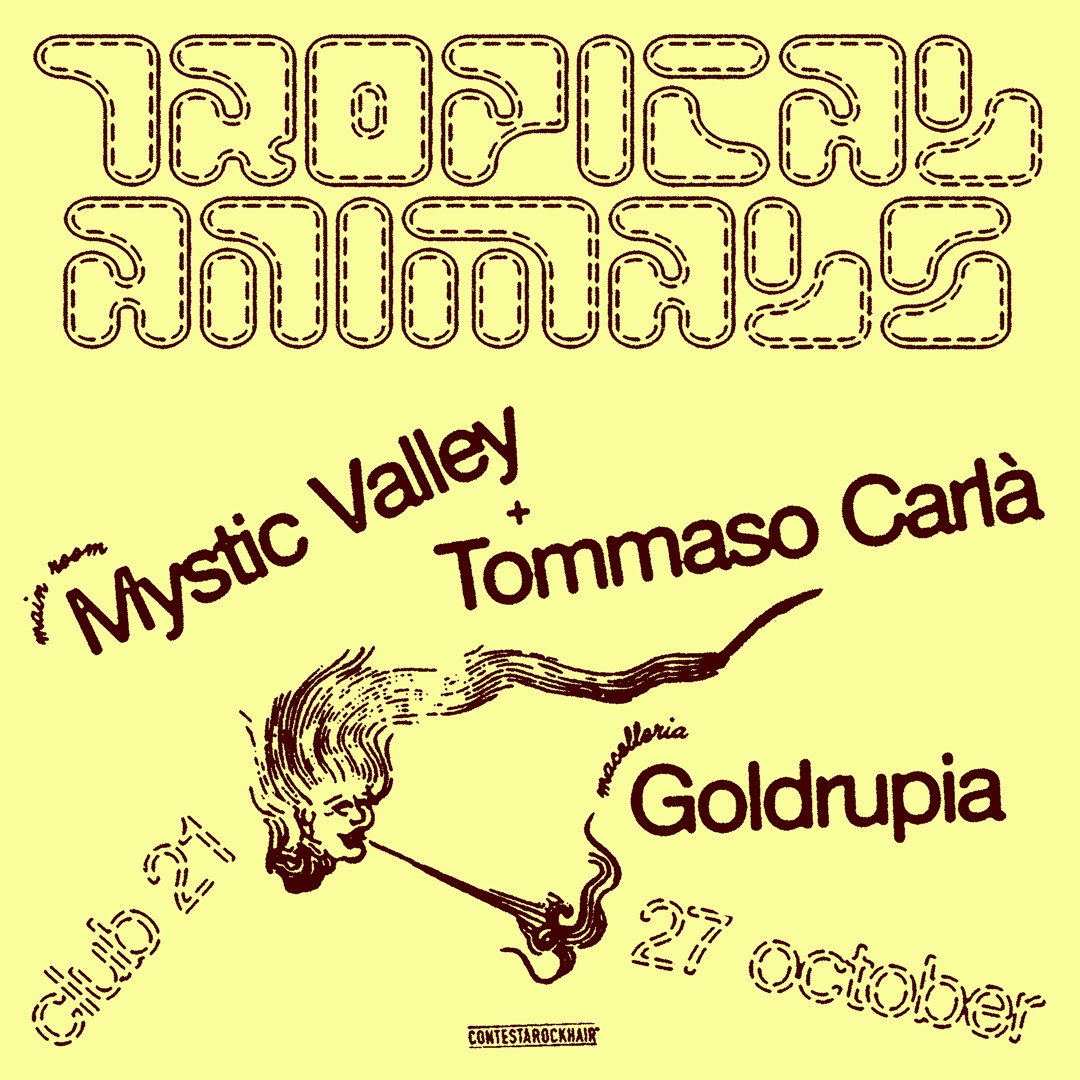 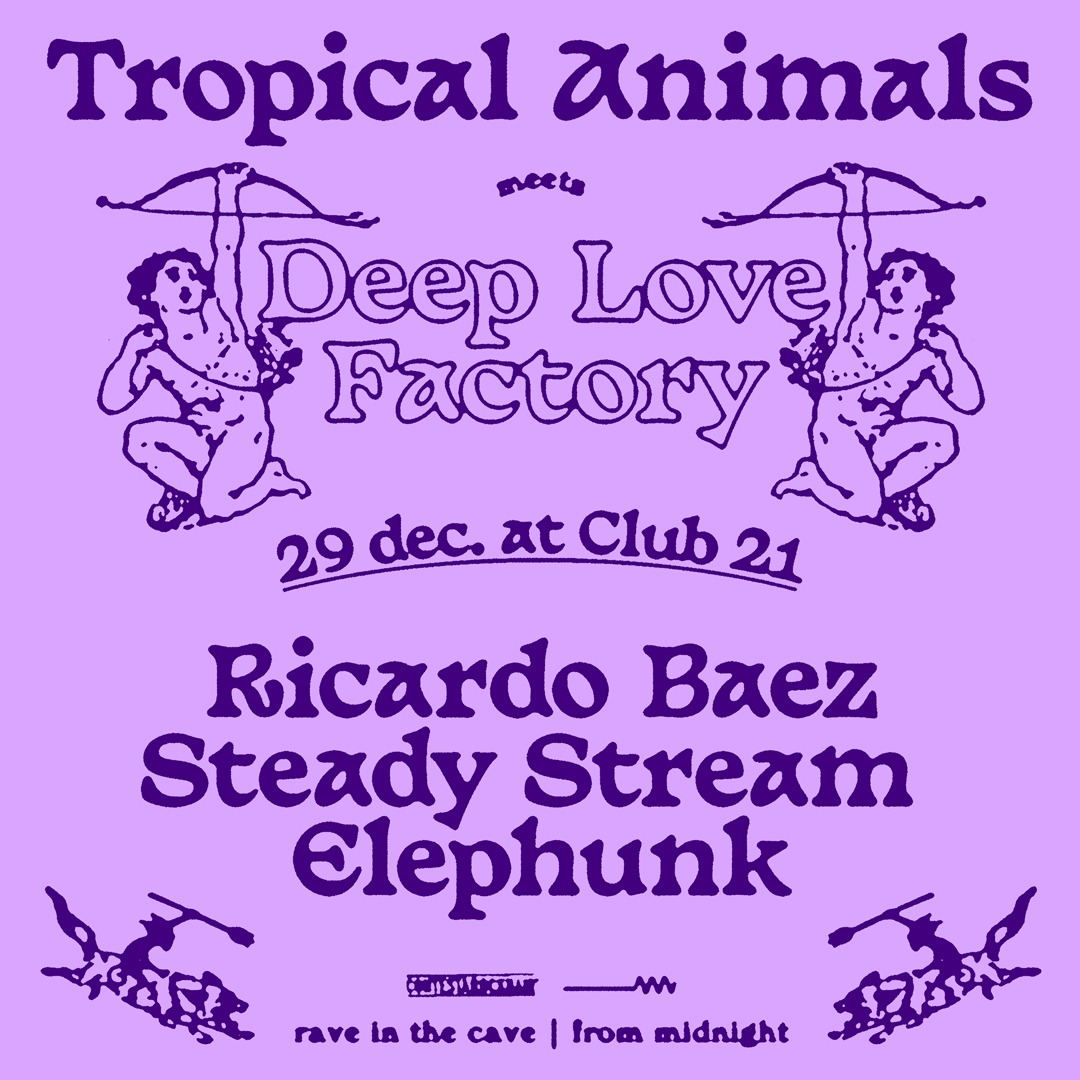 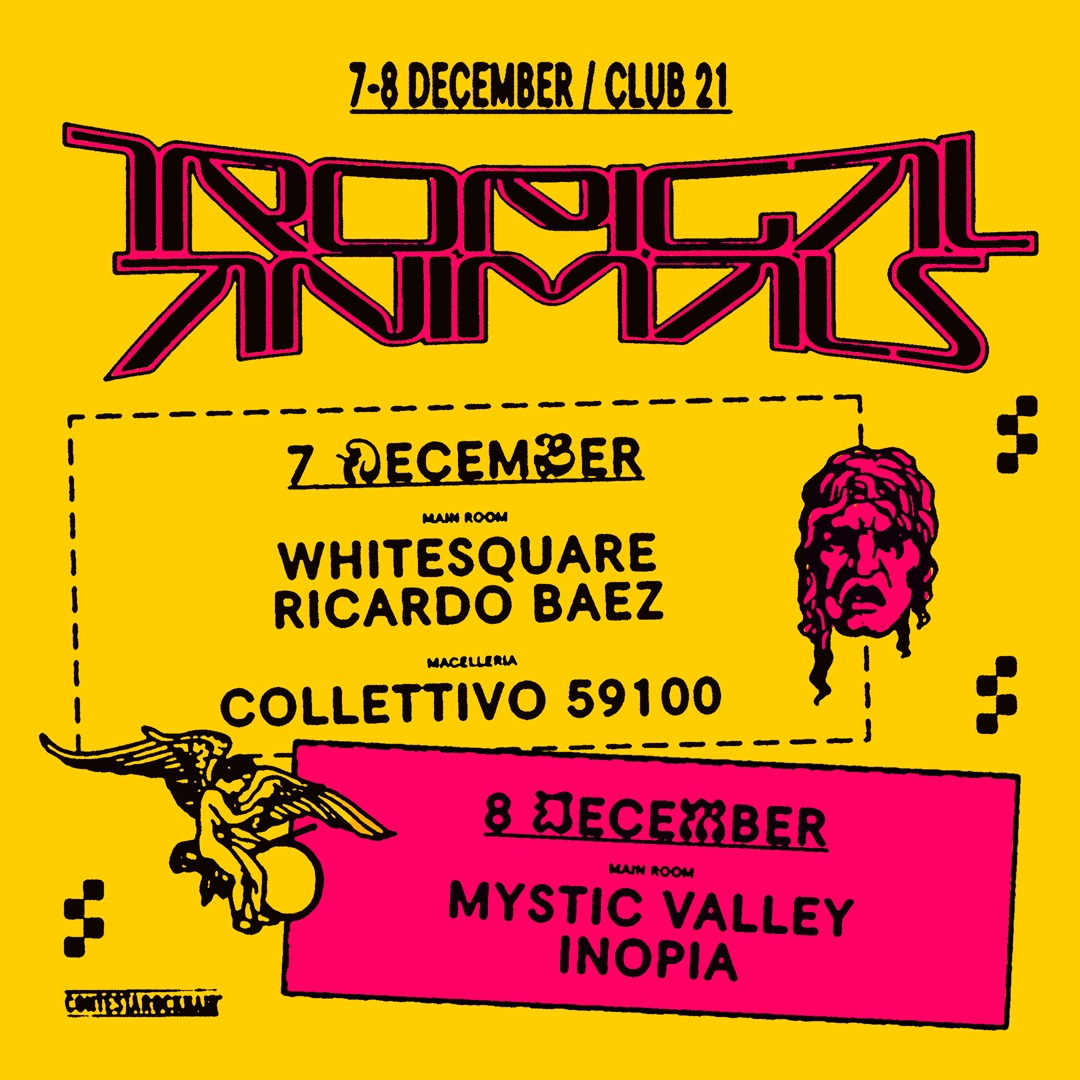 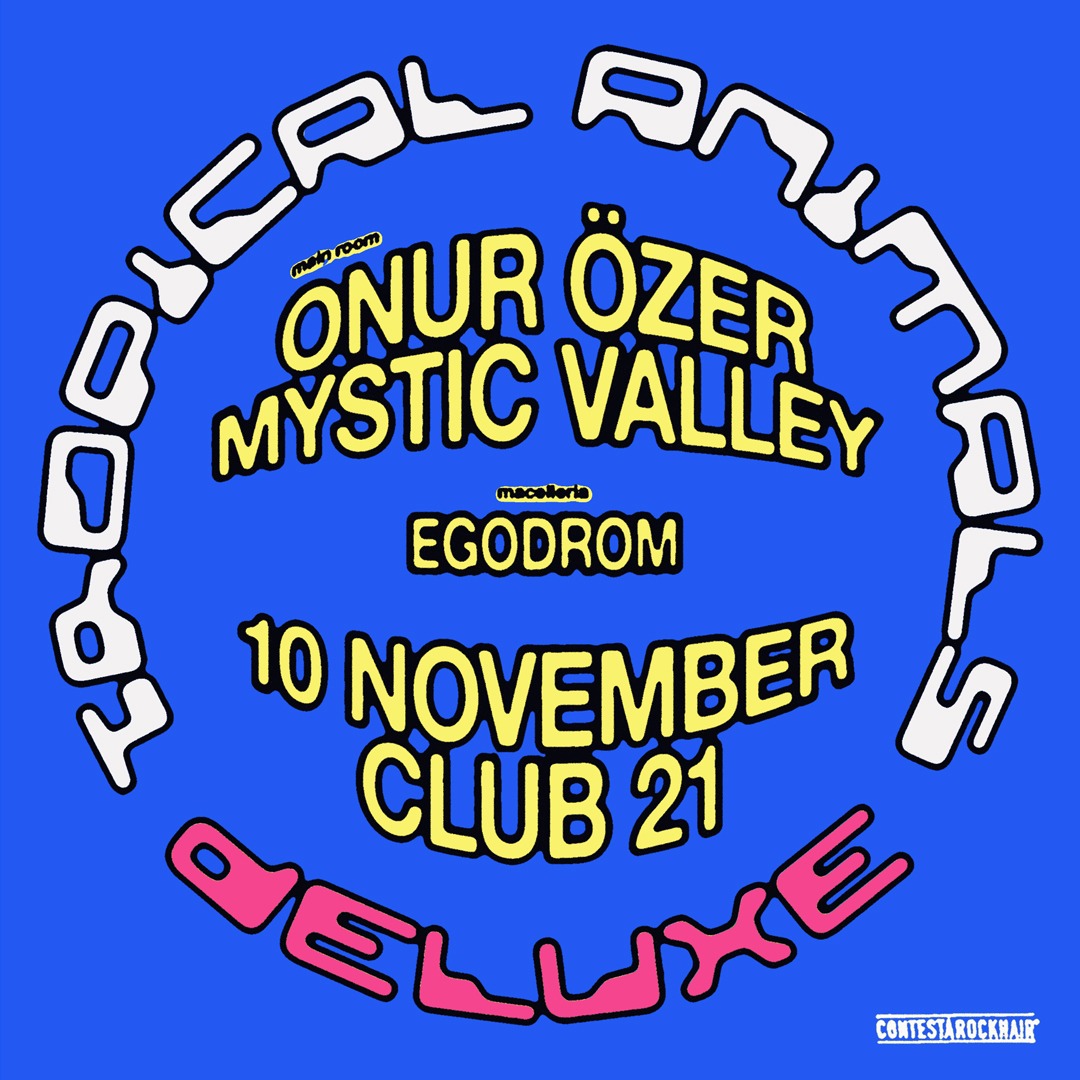 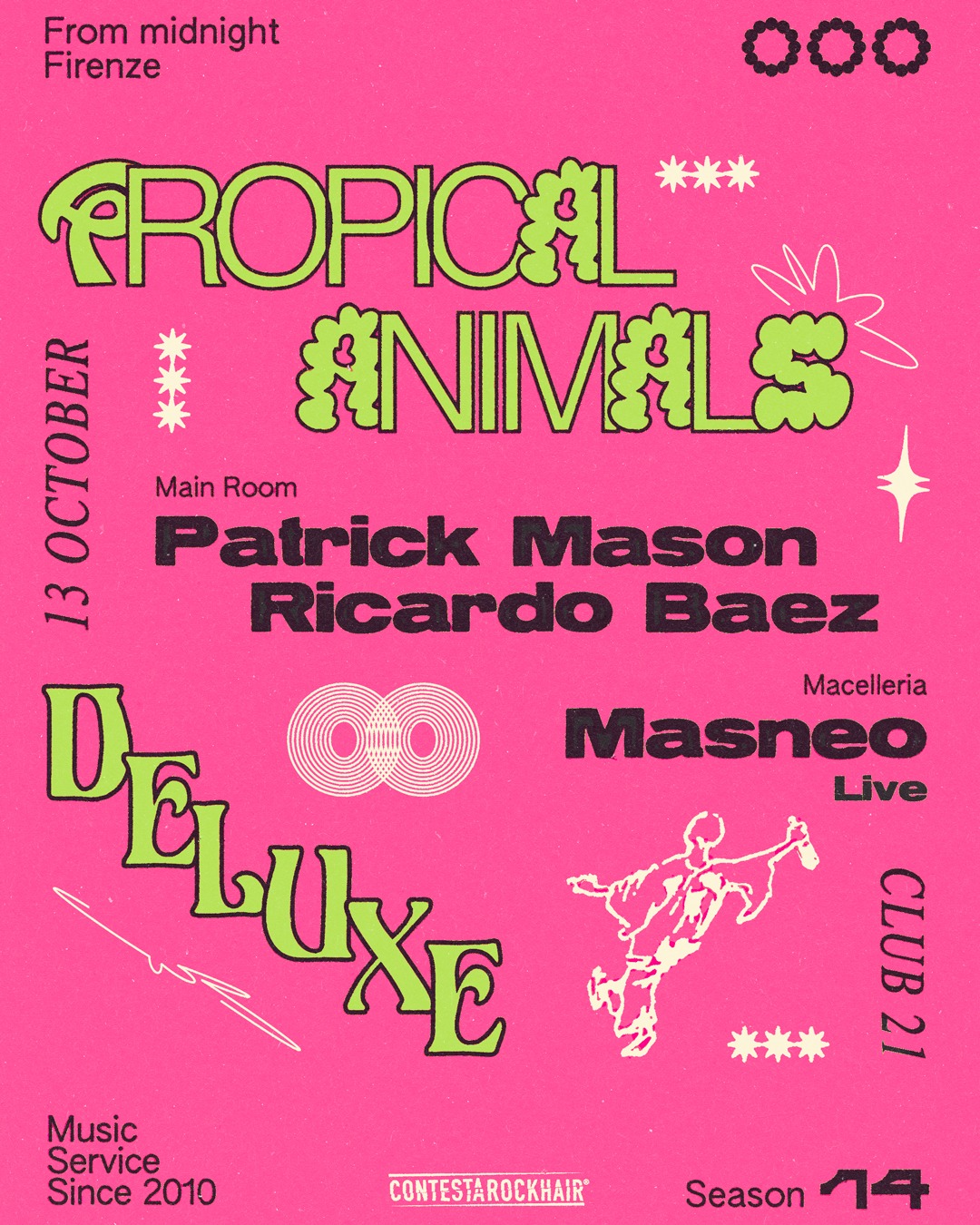 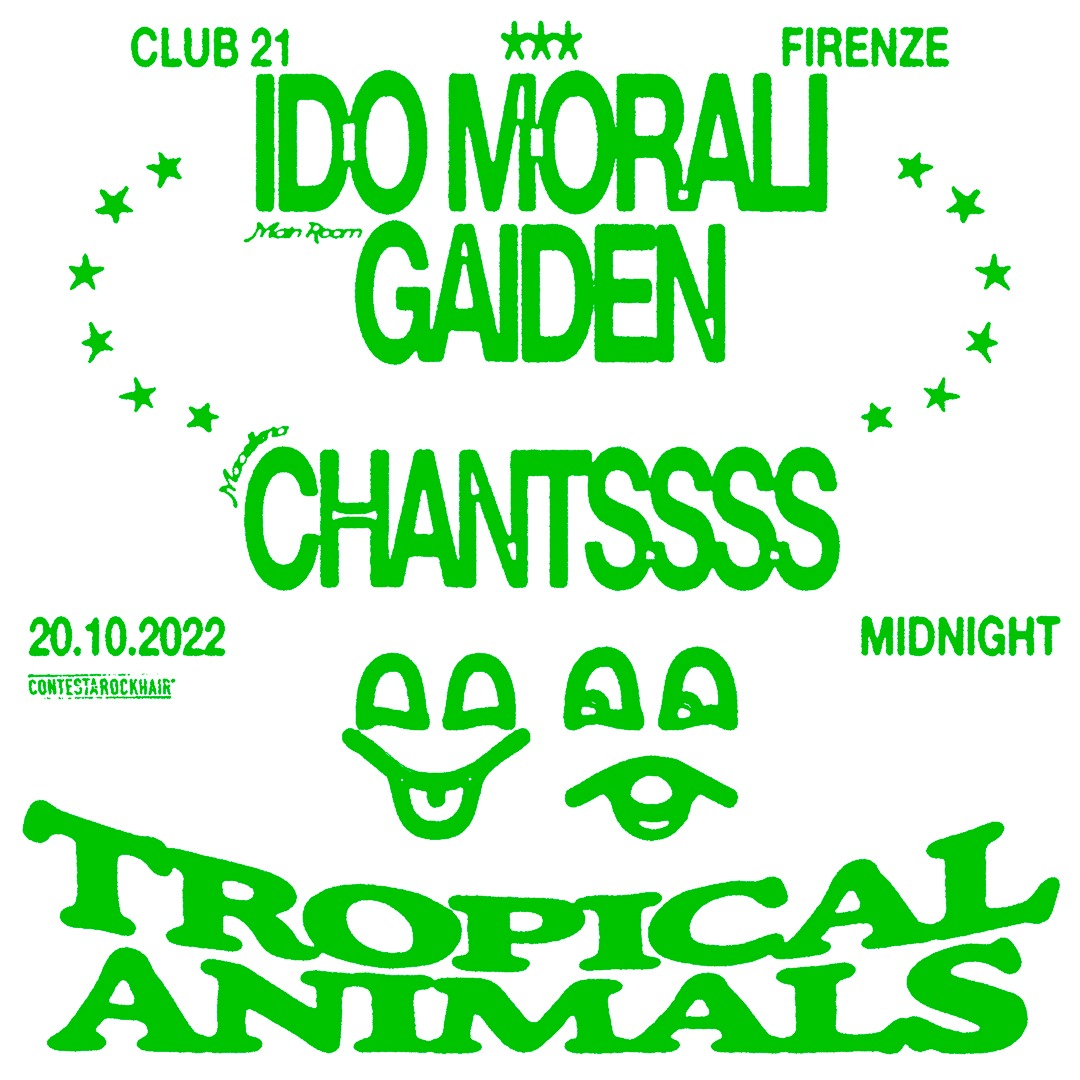 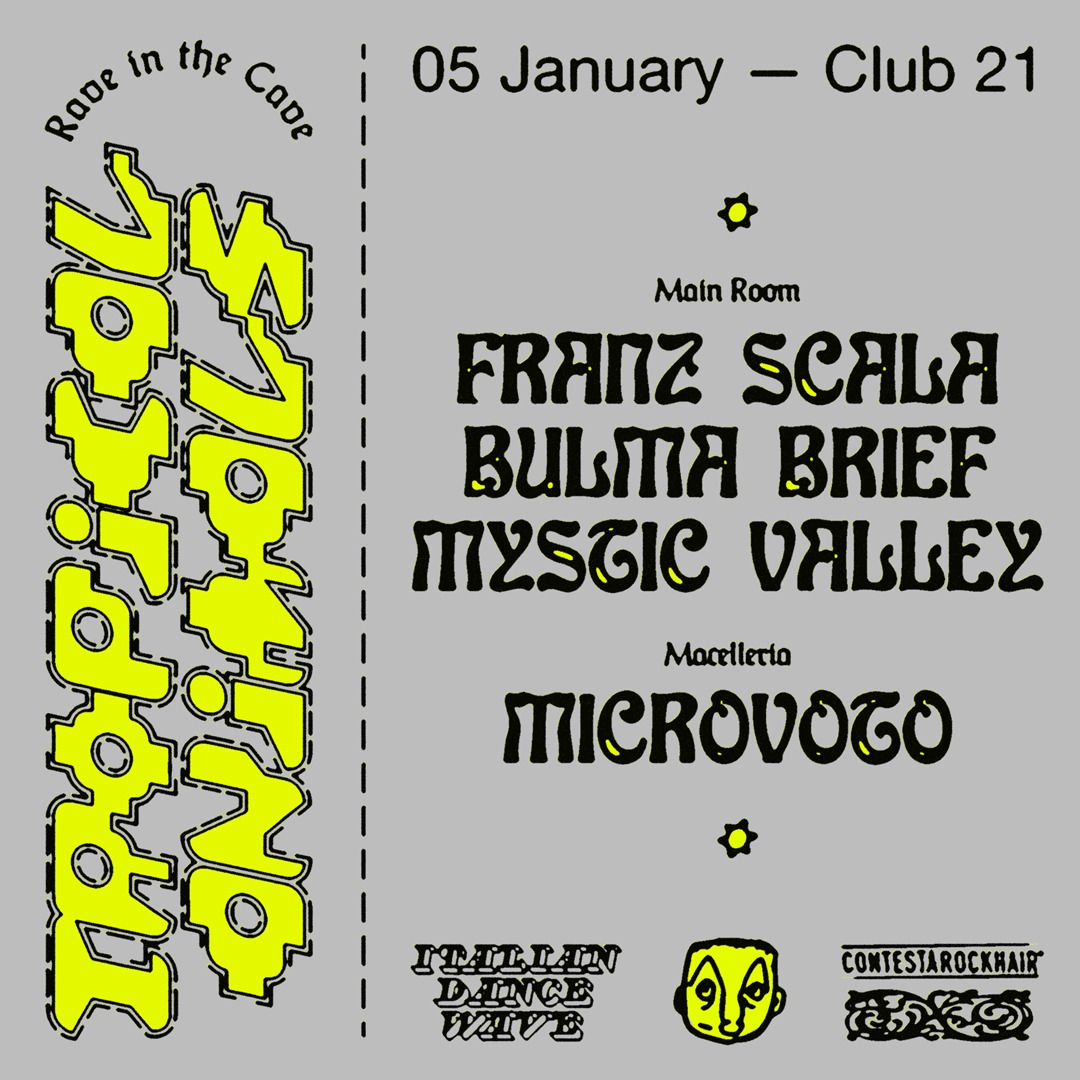 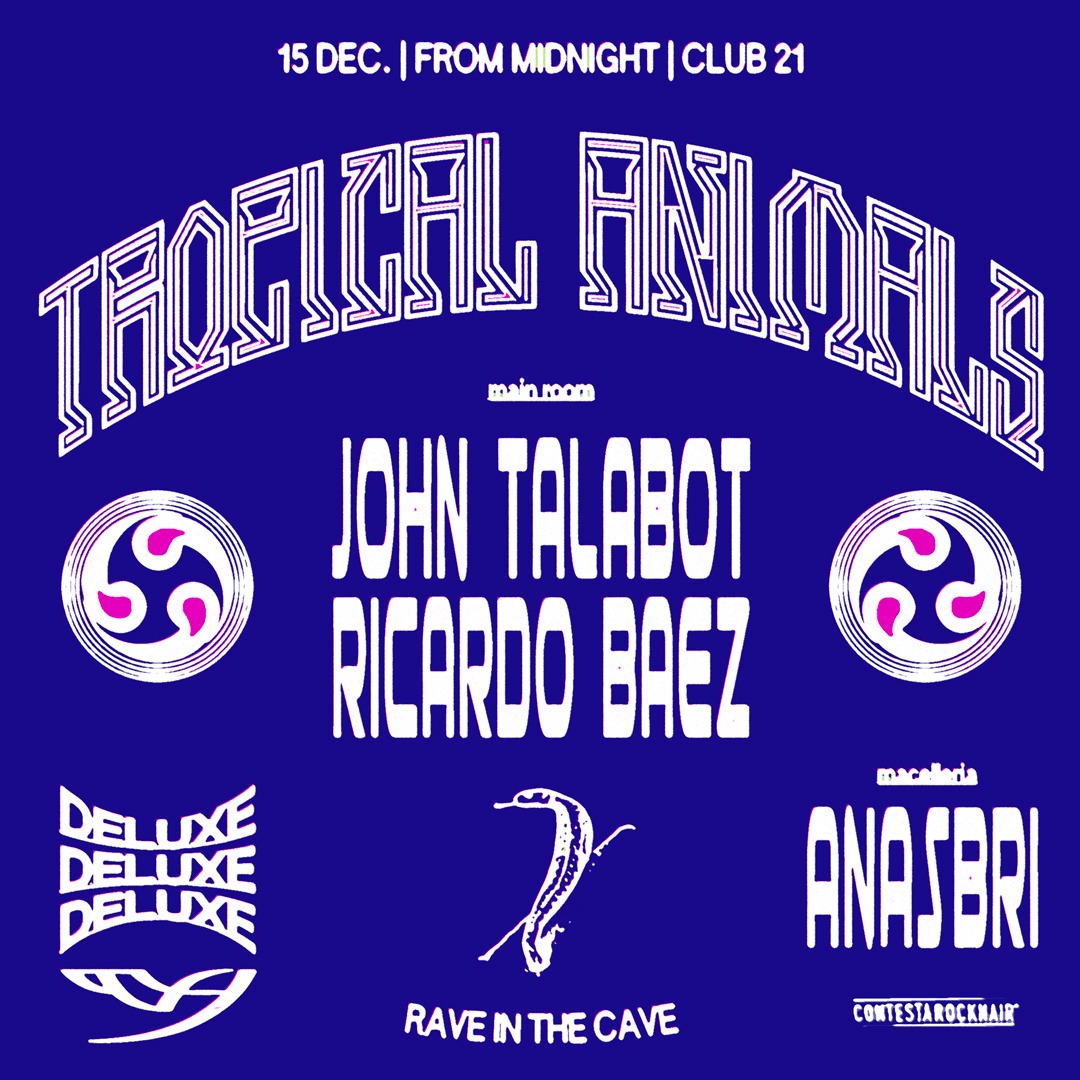 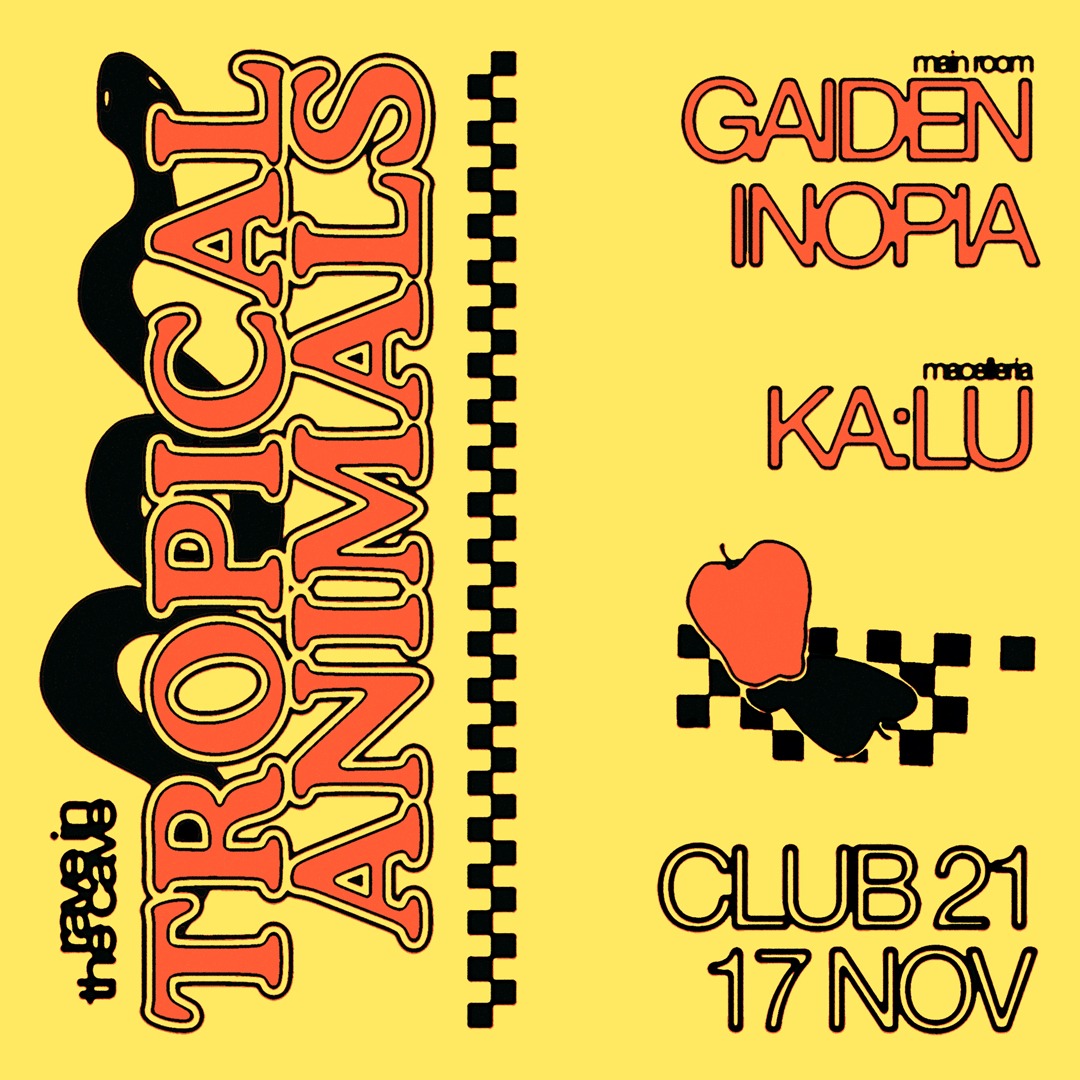 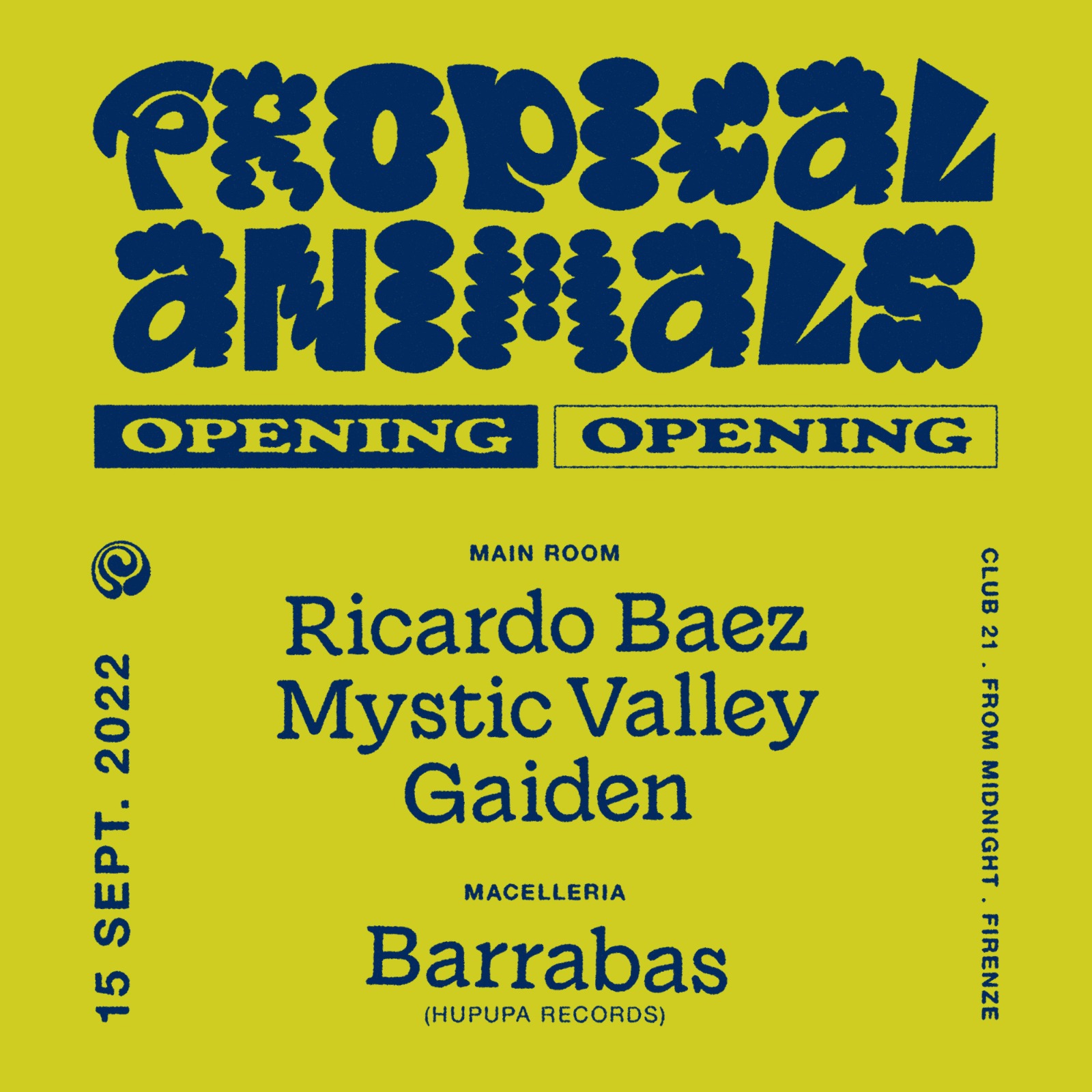 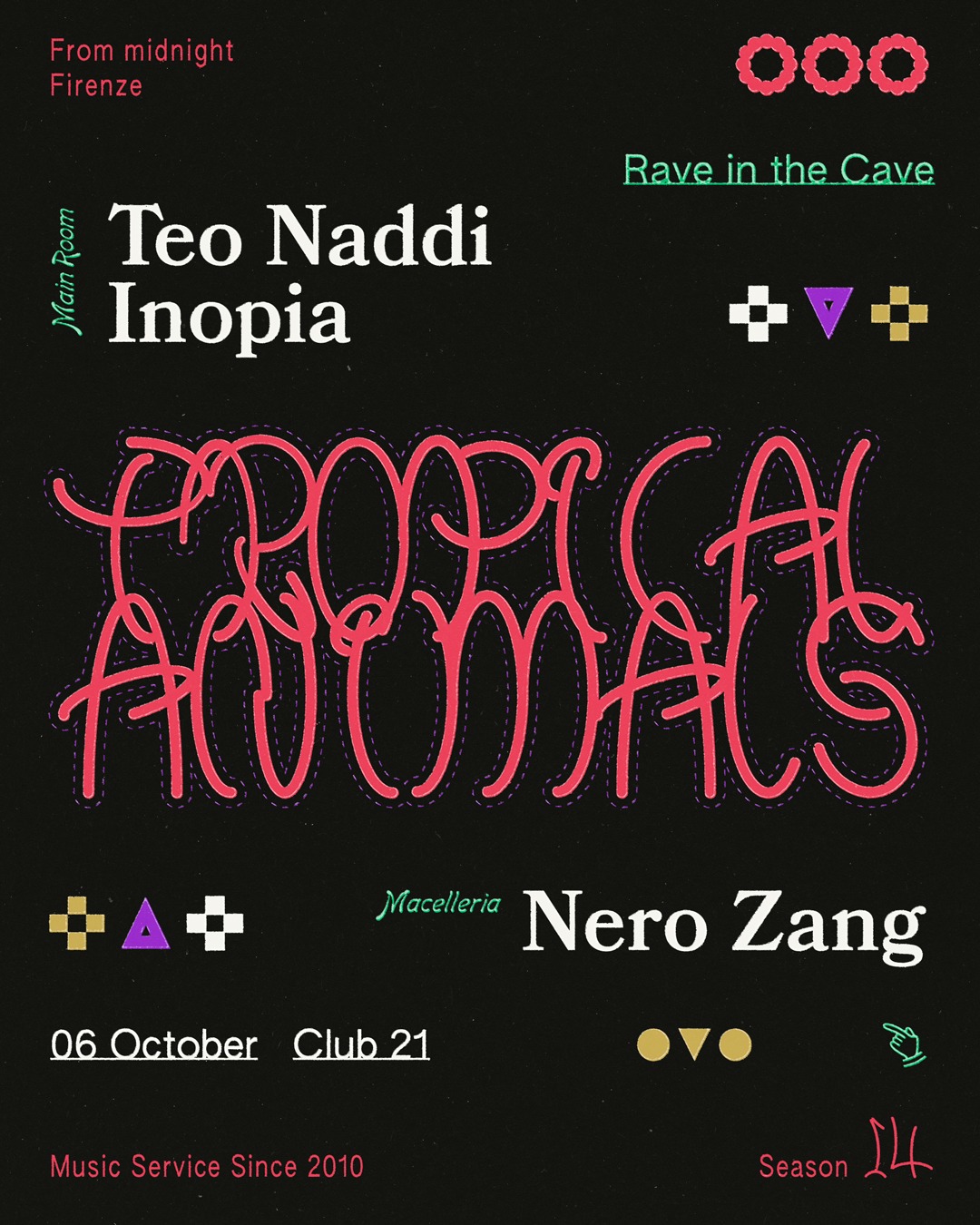 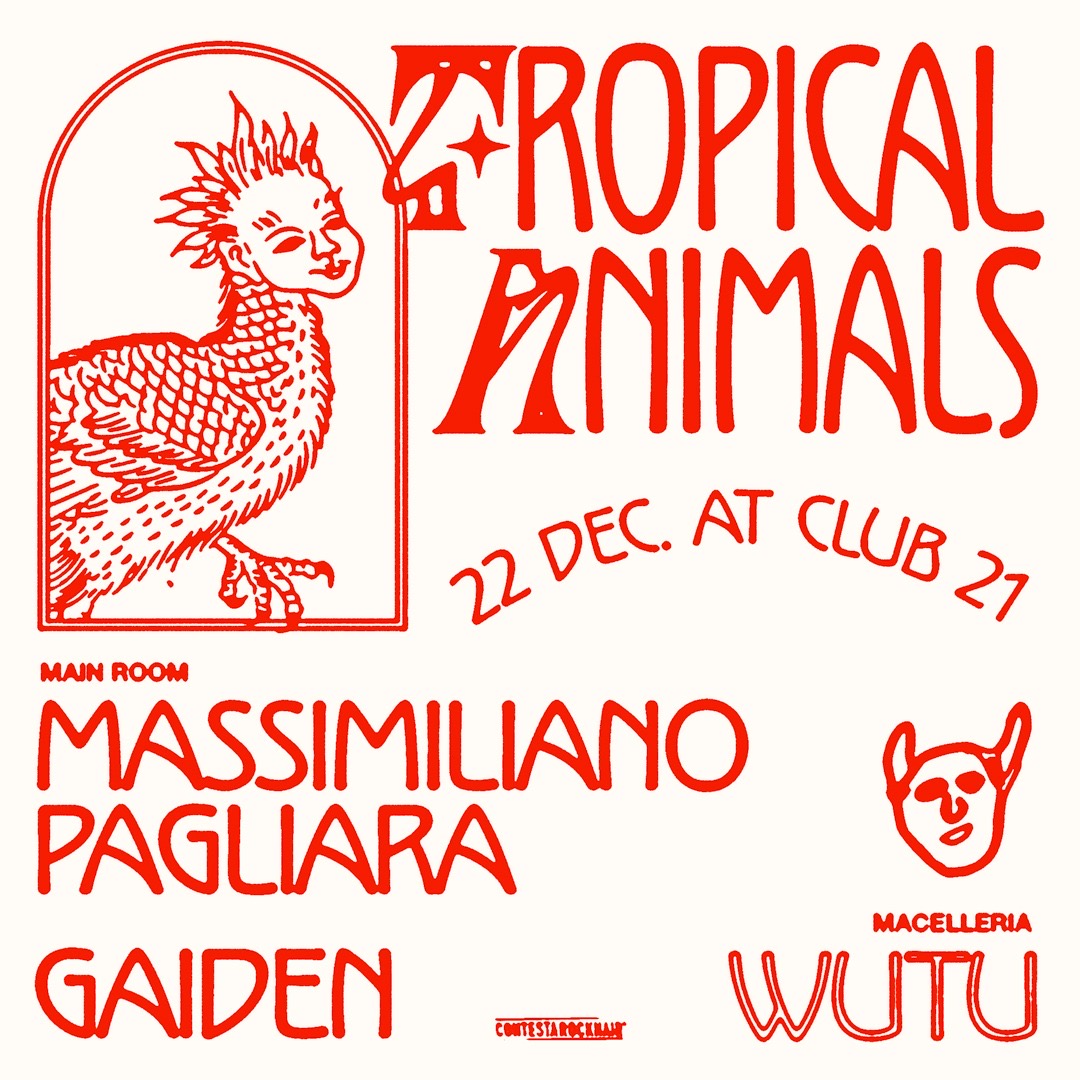 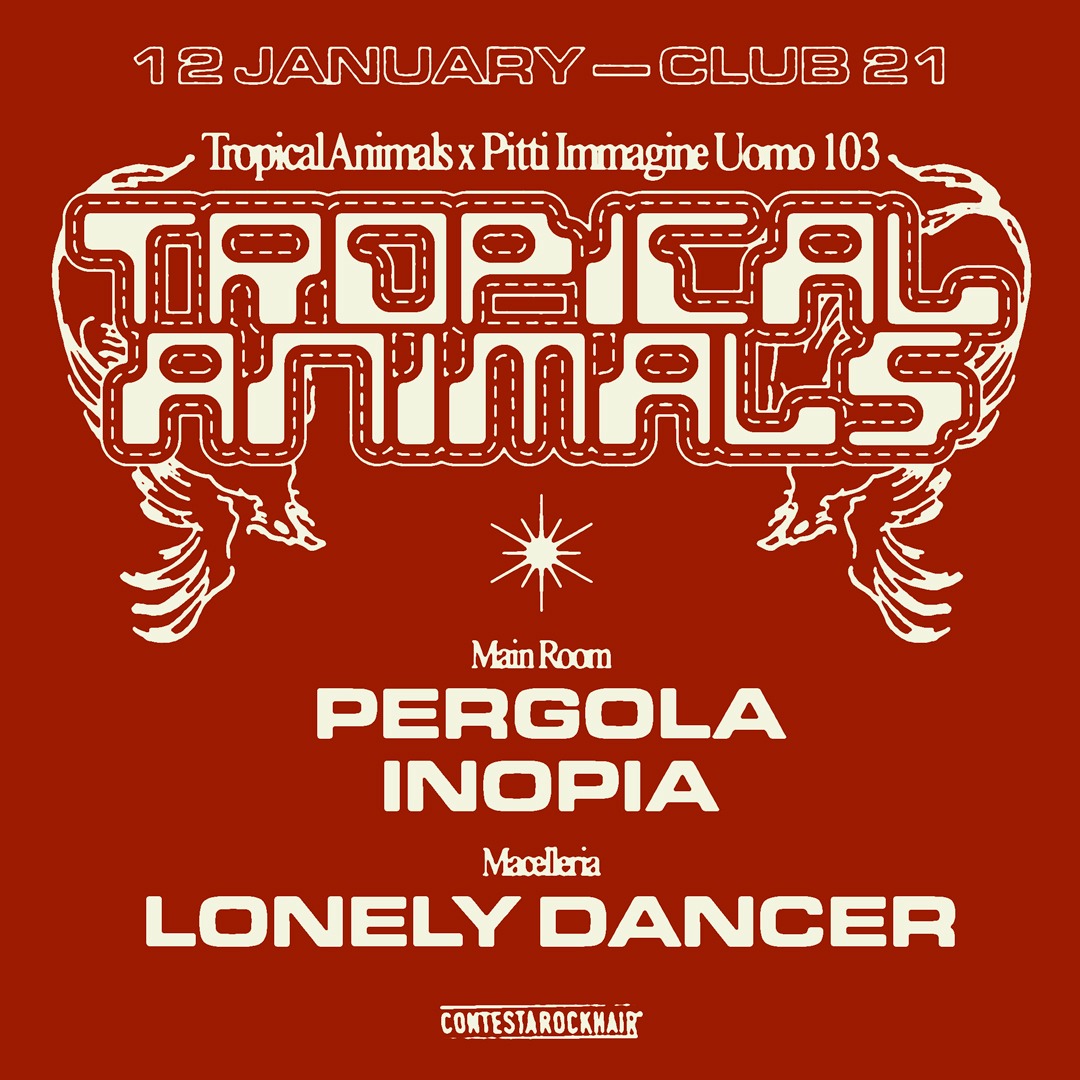 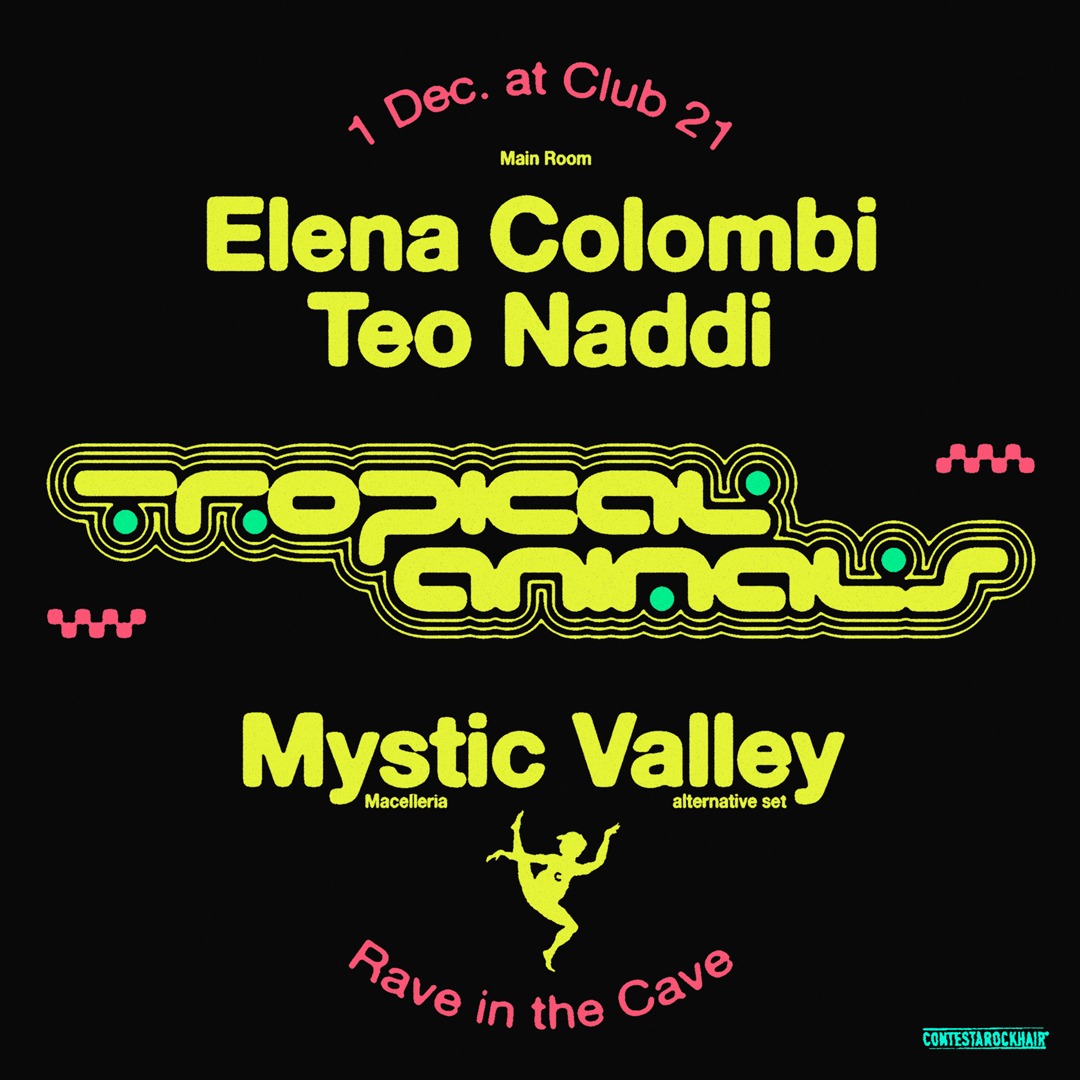 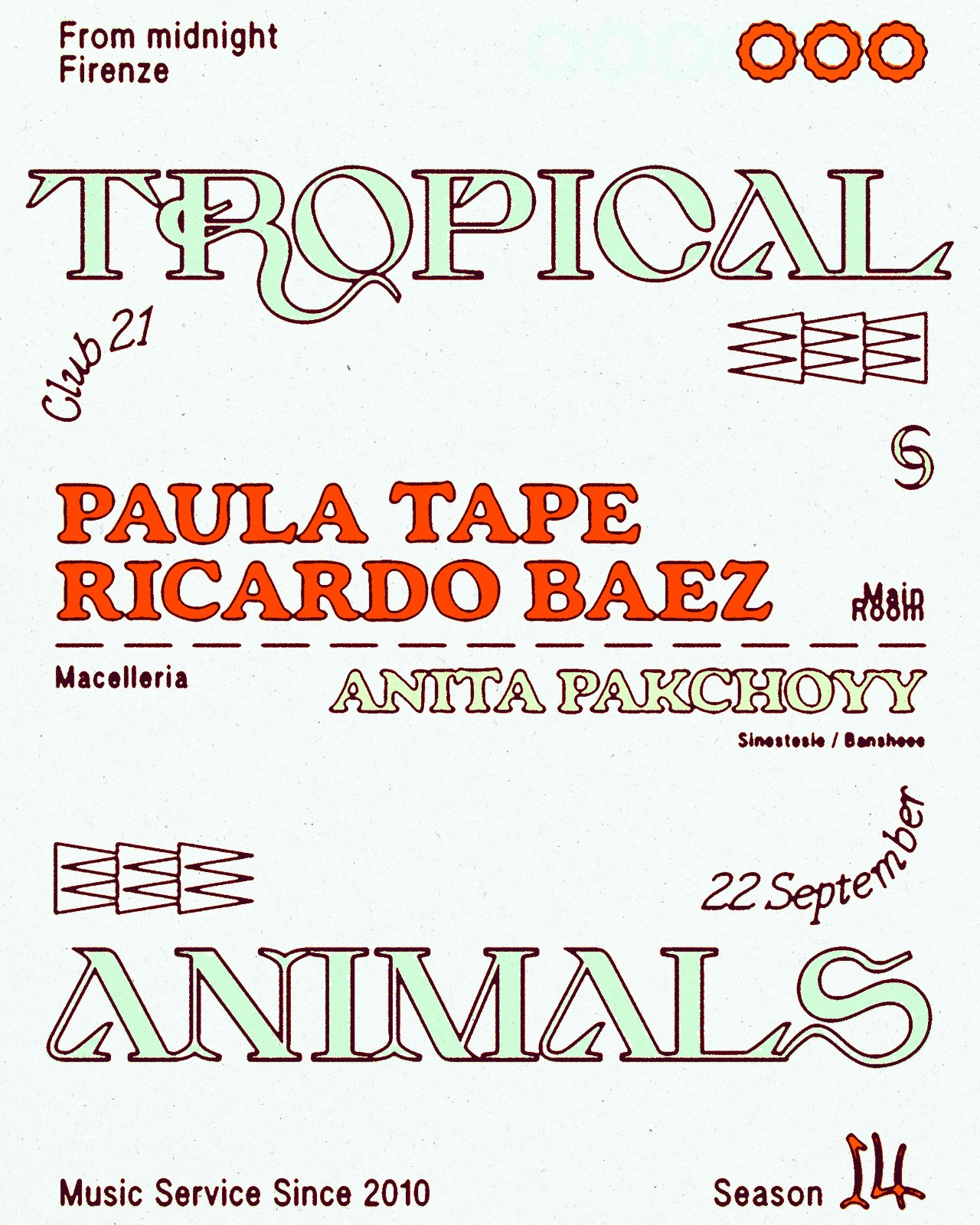 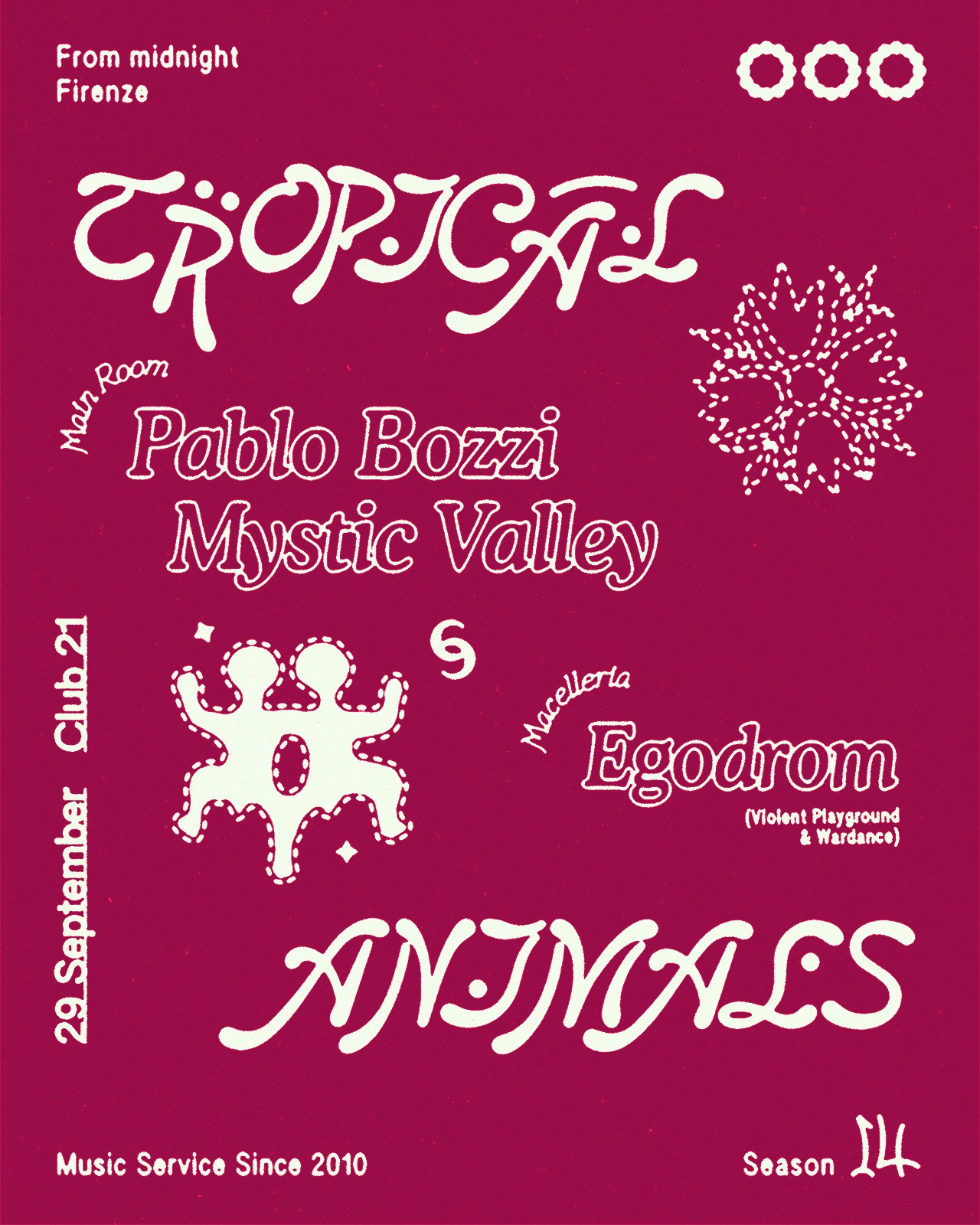 SORRY, THE LIST IS CLOSED FOR TONIGHT! SEE YOU AT THE DOOR!

Few club nights have lasted the distance like Tropical Animals. First established in Florence, Italy in 2010, the weekly party has evolved with the pace of electronic music over the past decade, becoming a firm favourite of international talent alongside local DJs and producers. Each Thursday, feet from the bustling Piazza della Signoria, a subterranean, intimate night club provides a safe place to exchange cultures, ideas and life stories with a spectrum of personalities and nationalities.

Indeed, while millions visit Florence in awe of its beauty, history and artistic heritage, Tropical Animals welcomes locals and visitors alike, operating with the same class but only looks forward. Even in a decade, generations shift and fashion changes. In response, Tropical Animals rarely sits still. What never changes in the focus on music as the lifeblood, the vision of founder and resident, Ricardo Baez, whose childhood at the fringe of music and fashion has led to a life dedicated to pleasure, creativity and community.

Reflecting a decade of alternative dance music culture, the list of DJs passing through the smoke at Tropical Animals is diverse and expansive, perhaps best characterised only by its commitment to quality. Selectors such as Bradley Zero, Pender Street Steppers and Rahaan have provided a taste of their own musical communities, adapting easily to Tropical Animals’ collective spirit. Legends and innovators like Kevin Saunderson, Marshall Jefferson and Chez Damier have soundtracked evenings with a touch of pure timelessness. Caribou, Soichi Terada and Azari & III have each performed classic albums live, while the impressions of early appearances by Jayda G, Avalon Emerson and Mall Grab remain firmly imprinted in memories of otherwise hazy nights. And they in turn remember the atmosphere, the hospitality, the architecture and the aperitifs….

Closer to home, Tropical Animals also enlists a rotation of resident DJs alongside Baez, each bringing a different sonic specialism to the varied tones but consistent vibe of the weekly party. Gaiden and Mystic Valley each bring their taste and knowledge to the fore, complimenting each guest with forward-thinking selections, reactive to the evolving culture that Tropical Animals has mirrored for a decade and more.

In July 2018, Tropical Animals made a natural progression into a record label. Beginning with Italian producer Whitesquare’s ‘In Light’, the label has encompassed releases from lo-fi Irish experimentalist The Cyclist, Italian disco legend Danielle Baldelli and others who reflect the sonic diversity of the party, including Ricardo Baez himself. Of course, recent events have placed the evolution of Tropical Animals on hold.

Nonetheless, the party found the time to celebrate its twelfth anniversary with a special livestream from Carl Craig. Soon enough, the ideas and exchanges at the heart of this special place will be reignited and the music will play on.

From Florence, with love. 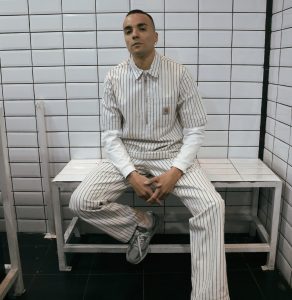 Since a young age, Ricardo Baez has been immersed in the ever-evolving fringe of music culture. Born in Florence to Italian and Venezuelan parents, immersed in his Father’s collection of blues and jazz records alongside the eighties pop tapes his Mother used to soundtrack dance classes, Baez has since made his own significant mark on alternative culture in Italy.

In 2010, Baez founded ‘Tropical Animals’, a weekly party in Florence that, in a decade since, has traced the evolution of alternative electronic music across house, techno and disco. While trends and fashion come and go, and club nights with them, ‘Tropical Animals’ has evolved alongside Baez’s DJ sets, the generous accompaniment to guest selectors from across the world. From Avalon Emerson to Vladimir Ivkovic, Marshall Jefferson and Jayda G, Mall Grab via Mafalda, Baez’s knowledge and sensitivity in the realm of electronic music have long made him the perfect foil to generations of the world’s finest DJs.

As such, Baez’s reputation has taken him much further afield, adapting his eclectic style to dancefloors at clubs across Europe and North America, including Tresor, Watergate, XOYO, Corsica Studios and Le Bain.

An experienced and thoughtful producer, Baez’s solo productions have ultimately found a home on his own Tropical Animals imprint, alongside a community of like-minded artists and friends such as Whitesquare, The Cyclist and Italian disco pioneer, Daniele Baldelli.

A figure and tastemaker truly dedicated to community, the Italian scene and the melting pot of creativity that only clubbing can deliver, Ricardo Baez’s dedication and energy flow audibly into every DJ set he performs. 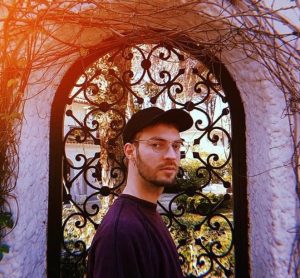 Gaiden is a Dj/Producer who lives in Tuscany.

Here, he grew up as artist over the years promoting e sustaining the LGBTQ  techno scene in his city, Florence, where in 2015 he became resident Dj at the well-known party Tropical Animals. This role enabled him to play with lots of artists such as Vladimir Ivkovic, Massimiliano Pagliara, Avalon Emerson, Bambonou, Aurora Halal, ADIEL, Dj Red, Whitesquare, Volvox, Inga Mauer, Borrowed Identity, Dj Boring, Pangaea and many others; feeding and refining his great passion for djing that he has been carrying on since he was a child.

In 2018, he obtained a Master Degree in Sound Engineering in Rome thanks to which he will be followed by Enrico Cosimi, one of the leading Italian figures regarding synth. This opportunity permanently affected his vision of music, projecting him in the world of productions and developing his passion for musical synthesis. He also deepened his knowledge of that field of sound design which finds inspiration in futuristic Movies and PC games from 80s and 90s. 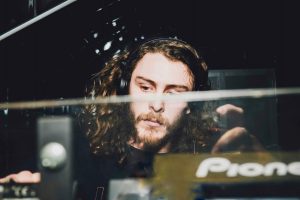 Andrea aka Mystic Valley is a mixture of tribal and ethnic rhythms of strange sounds from beyond.
Mystic Valley is the name of the new musical project by Andrea Battagli, young Dj and producer from Florence,Italy. His sound is best described as a melting pot of Italian psychedelic influences,from obscure disco to new beat and progressive, as well as English breakbeat and German. With a brackground in classic guitar, drums and a deep love for house and disco music (His previous project “Andrea” was influenced by 70’s roots) Mystic Valley is one of the next names in the Italian electronic music scene you do not want to miss out on. During his short but surely steady career, Mystic Valley has had the banche to Dj with some of the biggest names in music of out times suchas: Nicky Siano (Gallery NY),Glenn Undergound,Dj Rahaan, Mall Grab,Pender Street Steppers, Damiano Von Erckert,Jayda G, Fabrizio Mammarella,Soichi Terada, Bradley Zero, Chaos in the CBD.

We don’t like SPAM, so we will use your email only to get u to the latest parties in town,  Join our mailing list to receive hot info and exclusive access to our events

You have Successfully Subscribed!